In the year 2022, the world is celebrating the centenary of the discovery of the third world civilization. It was in 1922 that two archaeologists, RD Banerji and Daya Ram Sahni discovered almost simultaneously in Mohenjo-Daro, Sindh and in Harappa, Punjab the Indus Civilization. In 1924 the Director General of the Indian Archaeological Survey of India announced in the Illustrated London News that besides the ancient Egyptian civilization and that of Mesopotamia new world civilization in the Indus Valley had been discovered.

Today more than 2000 sites are discovered spreading over one million square kilometres along the Greater Indus Basin in Pakistan and its eastern regions in today’s Indian Union. Recent research has shown that Mohenjo-Daro is the largest city of the Bronze Age.

Prof. Jansen, president of the Deutsch-Pakistanisches Forum (DPF) has been working with the RWTH University of Technology for fifty years in Mohenjo-Daro and is the world’s best expert for the architecture of the site. For his services he had been honoured by the Bundesverdienstkreuz am Bande, the Sitara I Imtiaz, and the Hilal I Imtiaz.

Being also a UNESCO and ICOMOS expert member of the Technical Consultative Committee of Mohenjo-Daro he will start the cycle of festive performances with this matinee presentation. Several further festive events are planned in Pakistan, India and further countries, and museums involved culminating in an international presentation in the UNESCO headquarters Paris on 27th September. 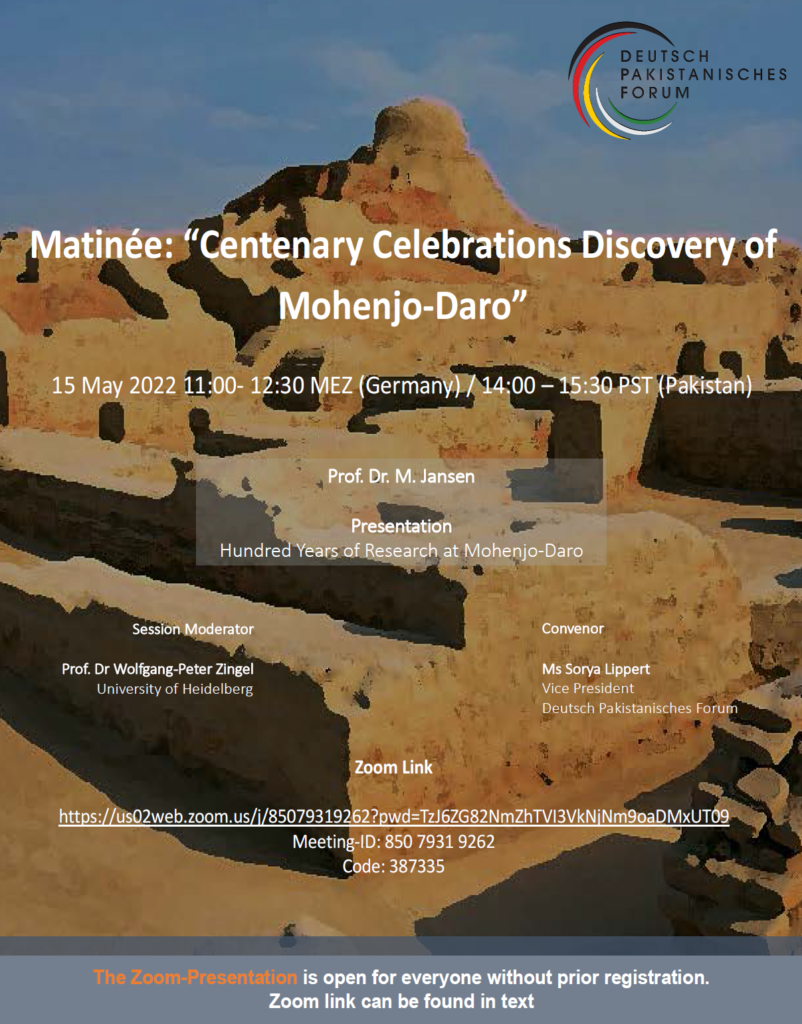 12:10 Conclusion and thanks by Prof. Dr. Zingel

Zoom Link (no prior registration is needed)